Chelsio Communications, founded in 2000, is a privately-held company headquartered in Sunnyvale, California with a design center located in Bangalore, India. Chelsio is the market and technology leader enabling the convergence of networking, storage and clustering traffic over 10Gb, 40Gb and 100Gb Ethernet.

With the proliferation of massive data centers, equipment density and power consumption are more critical than ever. At the same time cloud computing and server virtualization are driving the need for more uniform designs than the traditional data-center architectures can offer.

With its proven Terminator ASIC technology designed in more than 100 OEM platforms and the successful deployment of more than 100,000 ports, Chelsio has enabled unified wire solutions for LAN, SAN and cluster traffic. With its unique ability to fully offload TCP, iSCSI and iWARP protocols on a single chip, Chelsio’s adapter cards unburden communications responsibilities and processing overhead from servers and storage systems, resulting in a dramatic increase in application performance.

With its sixth generation ASIC technology, Chelsio has taken the unified wire to the next level with full offload for TCP, UDP, iSCSI, iWARP RDMA and Fibre Channel over Ethernet. Network convergence over 10Gb, 40Gb and 100Gb Ethernet is happening now, and Chelsio is a driving force behind the consolidation. 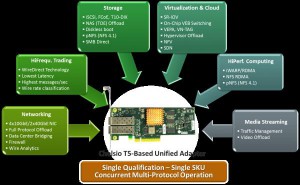